I am an obsessive person. I obsess about things.

I like to describe my current obsession as “building workshops and intense trainings that aim to bring new journalism startups to life.” Specifically, I focus on working with diverse founders who are leaving newsrooms to start audience-pay information businesses.

This obsession started many years ago while working for a pioneer in the “reader-funded reporting” world. Back in 2005 — during the pre-Facebook Internet era — an award-winning online newsroom based in Vancouver, Canada, called The Tyee, invited readers to contribute to its “Solutions Fellowship Fund,” and contribute they did. During my time at The Tyee, readers would go on to contribute more than $1,000,000 to support the newsroom’s reporting projects.

Since then, I’ve talked to dozens of newsrooms across the country about reader-revenue strategies, their donation pages, their membership software, their payment processing providers, in all of the glory that would only appeal to a data nerd.

I was convinced that there must be a technical panacea on the horizon that was imminently going to solve the “how to pay for news” riddle.

Concerned by these trends and what it would mean for journalism’s future, I started obsessing about the growing number of platforms, technologies, and tools that aim to support audience-pay businesses, and how they were approaching the newsroom adoption challenge.

First, I researched what the elephants were doing — platforms like Kickstarter (following their attempt at a subscription product with Drip, only to give it to XOXO festival later), Patreon (closely watching their acquisition of Memberful), and IndieGoGo. I believe that there are signals that each of these well-funded platforms sees the opportunity in reader-funded reporting and are are preparing to make even bigger inroads into journalism. (One such signal is hiring for positions like “Creator Partnerships Lead” that seek people with “deep relationships in journalism.”)

Next I dug into the paywall providers: from the big commercial players like Piano (which went on to consume Press Plus and TinyPass), to the newer upstarts like Pico, Pelcro, PressPatron, Substack and — a more recent discovery — Steady. I watched on as these upstarts made significant inroads in their respective countries and regions — with some thanks to excellent market timing — and as they saw adoption by startup newsrooms and existing newsrooms alike.

Newsroom have never been so well served by tailor-made technical solutions. Whether it’s the membership and revenue tools as described above, or the bounty of content-management tools that are available today… or analytics… or email marketing… or personalization. You get the idea.

Given these obsessions, and the questions I was asking, I would not blame you for thinking that I am one of those people who believes that technology is the answer to journalism’s business model problems.

I do believe that technology is part of the solution — perhaps a very big and important part — but I also believe that it should be a later-stage consideration.

And, after looking closely at all of the technology providers and platforms mentioned above, I believe that they understand this too (even if reluctantly).

Both Patreon and Kickstarter have invested in training and education for their creators. Their success as platforms relies on the success of their creators’ campaigns, so it makes sense that they would make investments into training. Kickstarter launched the first version of their Creator Handbook in 2014 (and officially added a journalism category that same year). Patreon followed with the launch of Patreon U in 2018. And there is a whole industry of third-party education and training material for succeeding on these platforms.

Among the startups that work with publishers there are early efforts to address the training and education challenge. One high-gloss example is Piano’s Traffic magazine, with the slogan “optimizing your business model for you.” Another is Substack’s podcast that interviews journalists who are successfully growing audience-pay businesses.

That key conceptual challenge — whether information, or Software-as-a-Service — is that the business model is the product, more than the journalism product itself. (Full credit to Ash Maurya who coined this phrase, and a wrote a whole essay on this concept, back in 2011.)

Let’s unpack that concept for news and information businesses…

When you’re starting out, a single great investigation, reported piece, podcast episode, or newsletter edition is rarely going to result in an overnight financial success.

The success of a new information product is not just the ability to just get the information out the door. Success relies on an entire business model that works: meaning that you’ve found a way to create some value for potential customers, you’ve found an affordable path to customers that enables you to deliver that value, and you’ve figured out how to capture some value back at a consistent rate.

That is the product: not the tacos, the food truck, sister.

Bringing the public radio model to the Internet

Let me try to illustrate the concept of “the business model is the product” with a relevant example:

Back in 2013, reporter Jesse Brown left the Canadian Broadcasting Corporation and started freelancing. In addition to paid freelance work, he produced regular pilot episodes of a media criticism podcast called CANADALAND (picture On The Media, but for Canada). Fast forward to 2019 and CANADALAND generates more than $320,000 USD in direct support from readers and listeners (minus Patreon fees), as well as revenue from podcast sponsors.

To achieve this level of listener support, CANADALAND has had to run several campaigns over that four year period. You can see the jumps in supporter growth in the chart below: 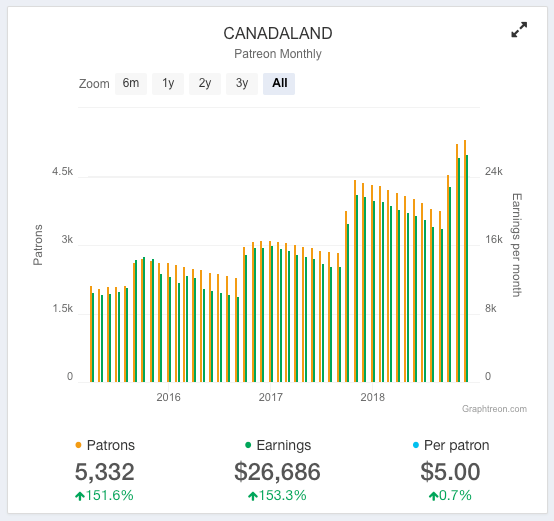 Roughly once a year, typically in the fall, CANADALAND launches a concerted effort to reach a new level of financial support from listeners — it’s planned, it’s effective, and it’s repeatable. It’s no accident that they’ve reached the level of support that they have, and it’s not just a result of consistently good reporting (though that is clearly the starting point).

The business model that CANADALAND has triangulated on is, basically, the listener-supported public radio model: annual campaigns to increase the number of monthly supporters, as well as sales of thoughtfully-presented sponsorships inserted into its shows.

But here’s the thing that most aspiring journalism entrepreneurs miss: the model doesn’t work without all of the component parts. It’s a virtuous cycle (often referred to in the startup world as an “engine of growth”) where increases in audience size increase the revenue from sponsors (who typically pay $25-$50 per thousand listeners for 60-second spot); audience growth means new listeners to speak to during membership campaigns, and — ultimately — audience growth increases the viral reach of the reporting product itself. It all has to work together.

Sell below cost, but make it up on volume

Not even good intentions, great technology, and free hosting can sidestep the reality of that journalism startups need a well-tested, defensible business model to succeed (which doesn’t bode well for projects like Newspack).

An illustrative example comes from Ghost, a non-profit that has set out to “build technology for the future of journalism.” Ghost was itself an early audience-pay success story when it raised more than $250,000 USD from 5000 backers on Kickstarter — greatly exceeding its $30,000 crowdfunding target. In May 2016, the Ghost project hit a milestone of $600,000 in annual recurring revenue from hosting fees and described themselves as “very firmly profitable.”

A year later they would announce Ghost for Journalism, a “$45,000 development program for independent publishers. Their ambition was to “to see the next Intercept, Vox, Bustle, Buzzfeed, Memo, Stratechery, Verge, NiemanLab, GOOD, Vice, FiveThirtyEight or Guardian” running on the Ghost platform.

This year we’re very excited to be dedicating our entire 10 person full-time Ghost team to helping grow three independent publications, along with $45,000 in resources toward their efforts.

However, when I checked in with the Ghost team earlier this year, they described the Ghost for Journalism initiative as largely unsuccessful. When I asked about the key takeaways from the experience, this caught my attention:

Overall I think upcoming journalism teams just generally need a much more entrepreneurial, audience-focused approach. Throwing content over the wall and hoping it’ll land in front of some people who care is no longer a viable strategy for anyone.

Ghost’s efforts are admirable and, like Civil’s efforts, I believe that there is no failure as long as there is learning shared with future efforts. However, both examples illustrate that a lack of technology is not the existential crisis that journalism is facing right now. And, as much as I would love it to be true, technology is simply not a replacement for a viable business model, or journalists who are as passionate about owning their financial future as they are about reporting.

Journalism is too important to fail

Let’s boil this all down to some impassioned takeaways, shall we?

If you’re thinking of starting an audience-pay news or information business, here are some questions to ask yourself to take before thinking about which technology you’re going to use for publishing, membership, payments, newsletters, or podcasts:

All of these questions are important to ask yourself early because (to paraphrase Ash Maurya): Life is too short to produce reporting that no one reads, listens to, or engages with.

And, if you are a technology platform that aims to support people who are creating news and information, I encourage you to ask yourself the question: Where are tomorrow’s customers going to come from? And how can we help those people get on the right path today?

Let’s be honest: the number of organizations producing quality news and information is probably shrinking at the moment. If we expect that to change — if growth of the sector is part of your company’s business model — you might want to starting looking at the journalism innovation pipeline problemand thinking about where to invest today.

If I can be bold for a moment, I’ll propose that we need more resources and support for the hundreds and hundreds of people who are being jettisoned from newsrooms with valuable skills and experience, and who don’t currently see a viable path forward in journalism. If we want them to see an opportunity — a shot at ownership, real equity, and a fulfilling career (albeit, at the hands of the most demanding boss ever) — then we need to light the path.

Democracy is probably not the only thing that dies in darkness.

Hey friend, have you heard of the journalism innovation pipeline problem? Here's how we're missing the opportunity to support early-stage founders.

10 skills that journalists and entrepreneurs have in common