In the days following the election, I received a loving, yet firm critique of my post-U.S. election Medium note from a close friend. We had a respectful and caring exchange about it. We concluded amicably. I committed to giving their perspective some further thought.

Shortly thereafter I received some less loving, and more direct feedback from a colleague. It was full of anxiety for the state of the world and outrage that I did not expect – this person’s fear about what had just happened was palpable.

This theme of fear started to appear everywhere. I noticed it in conversations with close friends (or tweet streams in one case). I recognized it on calls with work colleagues in the U.S. I felt it manifest as tension at family dinners. Many people that I cared about were in shock about what happened in the U.S. just eight short weeks ago. There is a lot of fear about the future, especially, as my friend pointed out, for the people who have to bare the brunt of hate crimes in the U.S.

These responses from my friends spelled out clearly that the words I had put down so quickly on Nov 9th – admittedly, while mildly sleep deprived and greatly needing caffeine – could easily be read as those from a privileged white guy living on the west coast of Canada: wildly dismissive and slightly out of touch – and they would be right.

The “privileged white guy living on the west coast of Canada” is by default true. The dismissive and out of touch parts I hope to keep working on. It is a gift when friends and colleagues care enough that they’re willing to risk deliver hard to hear truths. It opens an opportunity to reflect and to learn.

I realize now that I was also in shock that morning, as much of the world was, and mentally refusing to accept the full breadth of what this recent U.S. election outcome really means for huge numbers of people inside and outside the US. People who are allies – fighting the same fights and working toward the same social justice – and yet people who experience wildly different realities than I do as a tech worker in Vancouver.

A few days later, it hit me the hardest as I watched a Democracy Now! video about the resistance movement in Standing Rock. I watched people get shot with rubber bullets and soaked with tear gas, an all-too-familiar seen this last decade. The tears welled up, and I was reminded that I had stopped watching Democracy Now! several years ago because of the emotional cost. Trying to understand the state of the world had surpassed a point where I could contain it, or resolve it. So, instead, I turned it off and I tuned it out. I didn’t want to be an activist anymore.

I stopped watching most documentaries around that time too. For the most part, I tried to avoid difficult news. Tried to ignore how crazy the world has become by believing that the bad parts are simply more easily reported now – it was easier to be ignorant before the Internet brought the world’s struggles into a constant stream of media moments just waiting to be watched, reacted to, commented on, debated, and then forgotten again.

But this world is real. And people I know and care about are in those places: not just in the U.S., but in the remote hills of Syria reporting and trying to tell those stories. And I am fucking worried about them, and everyone else – and if I think about it for more than a nanosecond, it’s overwhelming.

I think this is intentional: the contemporary breed of sensationalist leaders and extremist militant groups are conducting “emotional warfare,” compelling some to radical action and many others to tune out. If this is true, I must ask myself: how can I stay the course? How can I continue to be an ally to the people and causes that I care about?

Back in 2008 at a “Social Tech Training” in Toronto, I presented to a room full of activists from across the country on “Time management for the productivity challenged,” sharing observations from working on campaigns for almost a decade at that time. I’d been watching as people were burning out all around me – often stemming from enormous guilt – and it was the first time I’d started to ask tough questions about activist work: Is this an effective way of working to make meaningful change? If we “win the battle” only to cross the finish line jaded, angry, and divided, did we lose the war? This slide says it all: 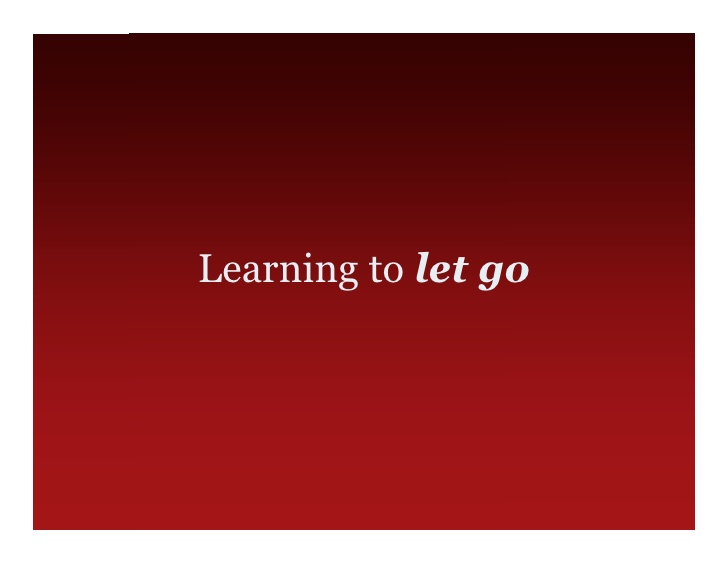 It marked a shift in my thinking about activism as an act vs. activism as a life choice. If it was a life choice, I believed, one would need to root that choice in a fertile soil so that it would continue to grow season after season. At the time I believed that soil was simply physical and mental health achieved through work-life balance. More recently I’ve come to believe it’s something closer to profound and enduring love, achieved through the pursuit of mindfulness and “present-moment awareness.”

Although these past years have also cemented my personal belief in the path of nonviolent action, I acknowledge that significant change is most often the result of a diversity of tactics. However, I believe strongly that the “the practice of humble curiosity and gentle mindfulness” is a necessary foundation for meaningful, sustained activism. I believe that this is a path that can be glimpsed in the lifelong work of movement leaders like Mahatma Gandhi and Nelson Mandela.

Circling back to my words the morning after the U.S. election – “Dear Friends in the United States: Don’t Panic.” – they still ring true to me as an important contemplation. It was a contemplation written for friends, first and foremost, and yet I understand those words were likely read more broadly and possibly by people facing very different realities.

What I was hoping to express that morning was: That this very moment is a profoundly important moment to explore the idea of non-reactivity.

We are experiencing the “Shock Doctrine” first hand, and the expectation is that we will react from a place of fear and anger. That is the aim of emotional warfare: to polarize us, to separate us and to create the perception of misunderstanding between people.

And if we fall into this place of reaction, fear, and anger, and if we see some people as “them,” and the good guys as “us,” and if we continue to think of us being on the “left” and them on the “right,” we have only achieved a literal revolution in the sense that we are going around in circles – likely destined to see the same pattern return over and over again (just look at the proposed Muslim registry: a Bush-era program returning again). Most of human history is a story of “two steps forward, one step back,” and, by some measures, life for many people on this planet may have actually improved these last 16 years.

I won’t claim to have any great answers (or even good ones), and yet – having watched the cycle repeat over my lifetime – I believe that we should be on the lookout for opportunities to create a “cultural bridge” toward something new. This very moment might be that moment, but if we’re caught up in reaction to the events happening around us, we might be too distracted to see it.

Raise a glass with the Uncharted Journalism Fund on Jan 17