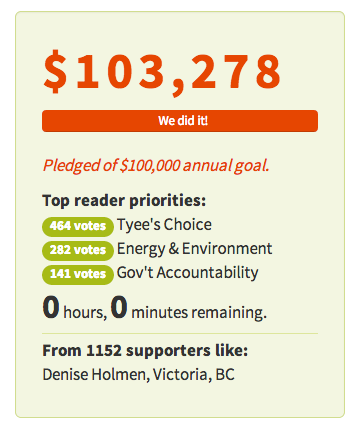 On the eve of November 18th, the last night of The Tyee’s time-limited crowd-funding campaign to go national, I peeled myself away from my keyboard as the fundraising widget ticked past $85,000. Knowing that I would be up all night otherwise, I forced myself hit the hay at 11:30PM Central, just as the ticker was soaring past $87,000. When I woke in the morning and checked the final tally, the campaign had surpassed its $100,000 goal; the morning before, the campaign had raised just $75,000, making the campaign’s success of hitting its target appear just out of reach.

So what happened? In the final 24 hours, the campaign gained a new momentum driven by urgency that encouraged more than 400 individuals to sign up and commit more than $25,000. That means that more than one third of the total number of campaign contributors signed-up during the last day of the campaign and contributed more than one quarter of the total campaign goal. I have experienced similar “hockey stick” spikes in the final hours of an online fundraising campaign, but very few as profound as this one. Needless to say, everyone at The Tyee was blown away by the support that was shown during the three-week campaign.

I was curious to understand a bit more about who was contributing, how they were contributing, and where the contributions were coming from, so I did some quick digging to share some rough analytics:

The top five Canadian provinces by number of contributions to the campaign are:

Interestingly, there were also six contributions from Oaxaca, Mexico (where I am currently located), so a big thanks to my friends down here for supporting independent journalism! There was also one contribution from Osaka Prefecture in Japan – is that you, Paul?

In terms of where the contributions originated, here’s a very rough estimate:

Most interestingly for me was the fact that more than 120 of the contributions were completed on mobile devices (iPhone, iPad, and Android phones and tablets). Even though that’s only 10% of the total number of contributions, that’s still one in ten people who are deciding to pull out their credit card and make a contribution on their phone or tablet. As as speculated earlier, developing the campaign site to work flawlessly on small screens (no small amount of work!) was probably helpful in this regard.

Here’s the rest of the browser and operating system breakdown for contributors to the campaign:

I was surprised to see IE so low on the list, as it’s often a relatively high percentage of visitors to The Tyee in general).

There you have it: the anatomy of $100,000 committed to support more fact-driven independent reporting in Canada by The Tyee. If I can find a bit of time this week, I may try to cook up a time series visual that shows that spike of contributions in the final hours of the campaign; my heart starts racing just thinking about that night again!

A few folks have fired me questions about the campaign that I’ve tried to answer in this post, and this one. Feel free to leave questions here, or drop me a note on Twitter, and I’ll try to answer them as I have time.

If you contributed to the campaign, thank you! If you didn’t and would like to, it’s not too late! ;)