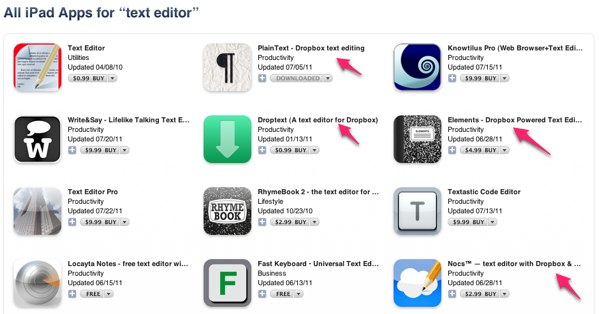 But I think there’s an equally pressing danger. Perhaps, even a more imminent threat to a diverse ecosystem of software options.

That threat is Dropbox.

Dropbox is an online storage solution used by many, many people. In fact, Dropbox has become almost ubiquitous. So much so that it has almost become a utility, akin to what Twitter and Facebook have become, or like Instapaper is quickly becoming (which is also alarming).

But, unlike Twitter or Facebook, Dropbox appears to be the only option that many iOS app developers are using for untethered online storage and transfer of data from within iOS apps.

It really hit me over the head yesterday when I was trying to find a simple text editing app that would work on the iPad.

Other than editing text files (with extensions like .md or .markdown), my only need was something that could open and save documents on the Internet – say, using an existing standard FTP/sFTP, or Webdav, or something along those lines.

As I flipped through page after page of text editing apps, more often than not the only option to fetch and store documents online was Dropbox. In fact, there’s a whole monoculture of apps – not just text-editing apps – that work only work with Dropbox (well, maybe they provide a ‘e-mail your file’ option too, but you get the drift).

In the text-editing family, there are some apps that I’m really quite surprised about, like the incredible iA Writer – why does this great app not have a simple way to fetch and store files that doesn’t require Dropbox, or a connected PC with iTunes?

This is the early writing on the wall – exactly what any individual who appreciates software innovation should worry about – an entire class of software that throws existing standards out the window, only to support a proprietary service that’s been around for a mere three years.

Have we learned nothing from the failures of services like delicious.com and the many similar tales that came before it?

So what’s the problem with Dropbox, you ask? Well, for starters their record on protecting users is a bit suspect, and that is ultimately led me to ask Dropbox for a refund earlier this year. So, problem number one is that I don’t use Dropbox anymore.

The more pressing issue is that some iOS app developers are using Dropbox like a public utility – which is most certainly is not – which only perpetuates the trend toward seeing these apps that only support one (proprietary and very much not ‘open’) file transfer method.

Quite possibly, this behavior is encouraged by iOS, which – unlike Android – don’t seem to have a global ‘share’ API that enables any application to share data with any other application. (For example, when sharing a photo from my Android phone, I’m able to pass that photo to any application I have installed that supports that file type, for example a Flickr app, Twitter, Facebook, Evernote, Google Googles, and so on.)

I really with there were more options.

Something simple like an Etherpad with support to open text files over sFTP, HTTPS, or WebDAV would be fine.

P.S. Ultimately, I found a small handfull of options that theoretically support open standards like FTP/sFTP and WebDAV. I may give them a try. However, it was more than likely that if an app did support something other than Dropbox at all, it was Apple’s iDisk (which, with the new iCloud coming, I’m not clear on the future of).